TRANSITION FROM STEAM AT LEEDS

THE TRANSITION FROM STEAM 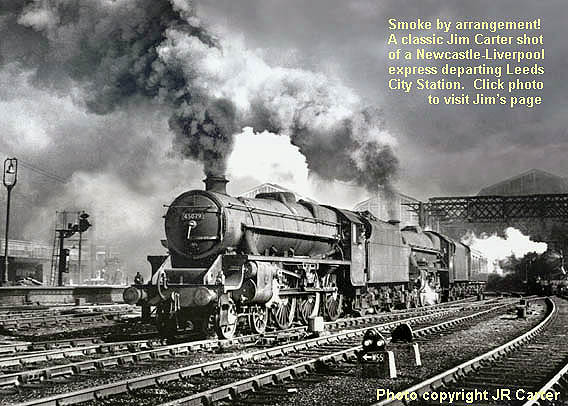 (Above-Below) Returning to Leeds city centre from 'BR Steam Days One' big changes are underway at the new Leeds City station! Following closure of Central at 6pm on May 1st 1967, all local Bradford and Harrogate

services ran into Leeds City from the following Sunday morning. With evidence of reconstruction work all around, a Leeds-Harrogate Metro-Cammel dmu awaits departure. Today's rail commuters will barely recognise this scene, nor the one below below...the old station originally had three through platforms, later increased to five, two of which were made up of joining bays at each end, with the longest being 460 yards. A new through platform, No 12 was built to the south side of the station accessible to passengers through the supporting wall. The proposed new platform has yet to be built in this view of Class A3 No 60074 Harvester making a smoky exit out of Leeds City with the 9-00 Liverpool-Newcastle. 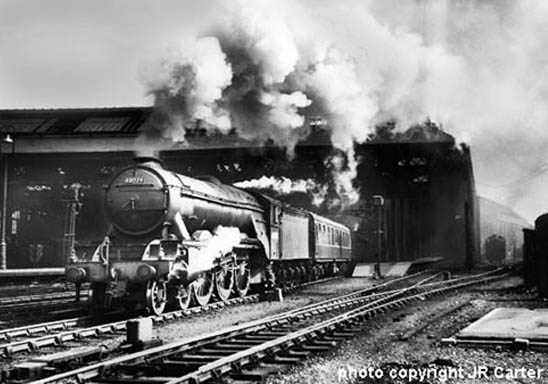 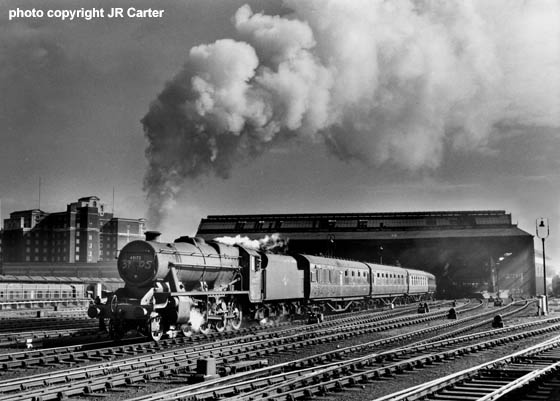 (Above) Prior to taking up his post as CME of the LMSR in 1932, William Stanier was Assistant CME of the Great Western based at Swindon. The '8F' 2-8-0 was a direct descendant of the earlier Churchward GWR 28XX class introduced in 1903. At the outbreak of the Second World War, only 126 8Fs had been built, but the Government requisitioned a further 240 oil-burning engines for war service overseas and as the war intensified, the Class 8F was adopted as a British national standard. After hostilities ceased a total of 719 entered traffic on Britain's railways and around 150 survived into the last year of BR steam. As the 8Fs were capable of handling partially-fitted freights at up to 50 mph, they were well able to haul passenger trains. Here, No 48153 departs from Leeds City with a holiday excursion to Blackpool in June 1960. Dominating the background is one of the great English railway hotels - the Queens Hotel - with its distinctive art-deco architecture - now a Grade 11 listed building - constructed in 1937 by architects William Curtiss Green RA and William Hamlyn FRIBA, who were also designers of the Dorchester in London. The Queens Hotel had the distinction of being the first hotel built in Britain with en-suite bathrooms to every room. 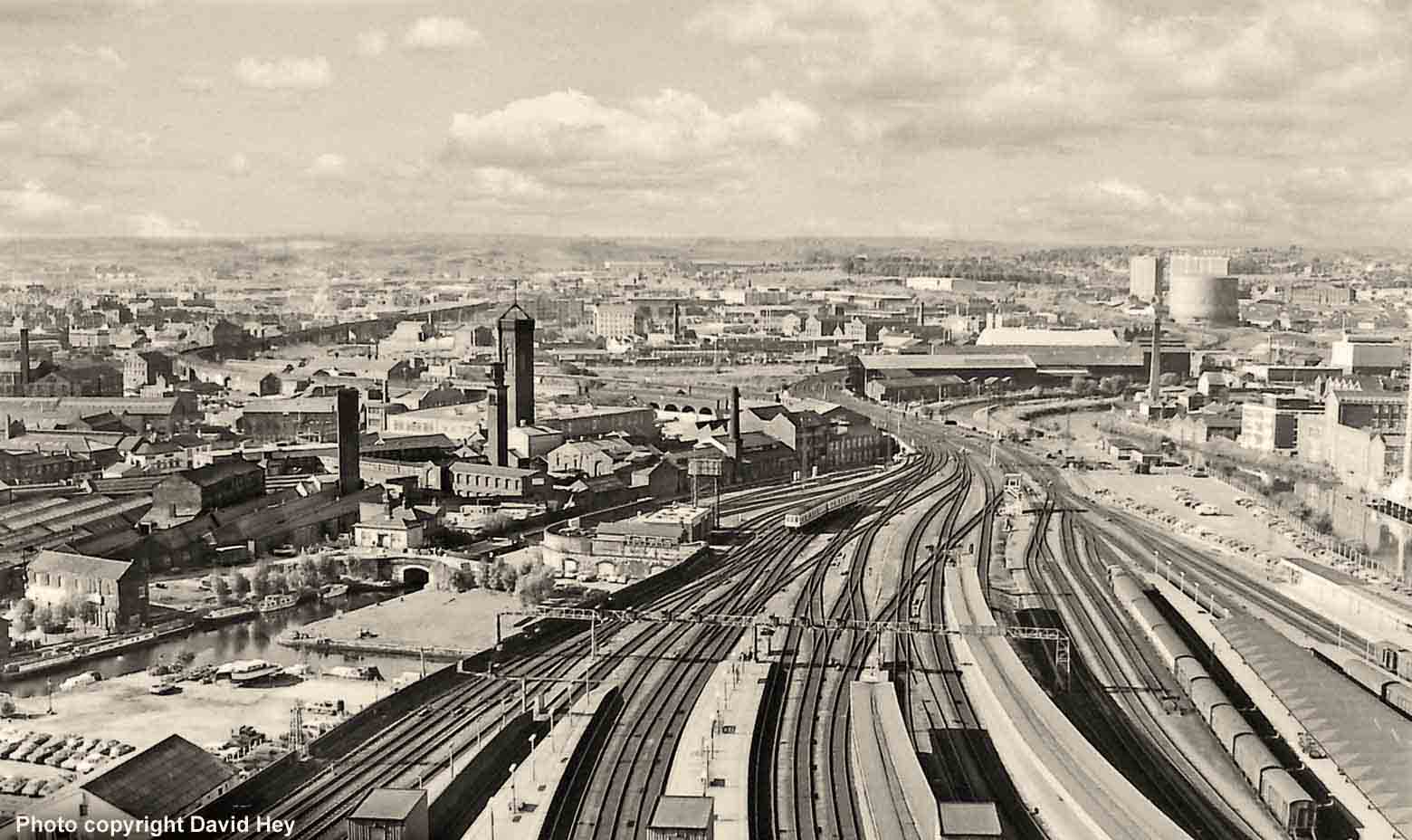 (Below) Class B1 No 61090 on an engineers train at Leeds City on 28th July 1963 during rebuilding of the station; some of the iron station roof supports can be seen on the bogie bolster wagon. The new City House office block is under construction on the right and the old station roof is being dismantled on the left. The locomotive was built by the North British Locomotive Company in October 1946, withdrawn in September 1963 and scrapped at Darlington Works. Click here to visit Keith's 'Rail Cameraman' Page. 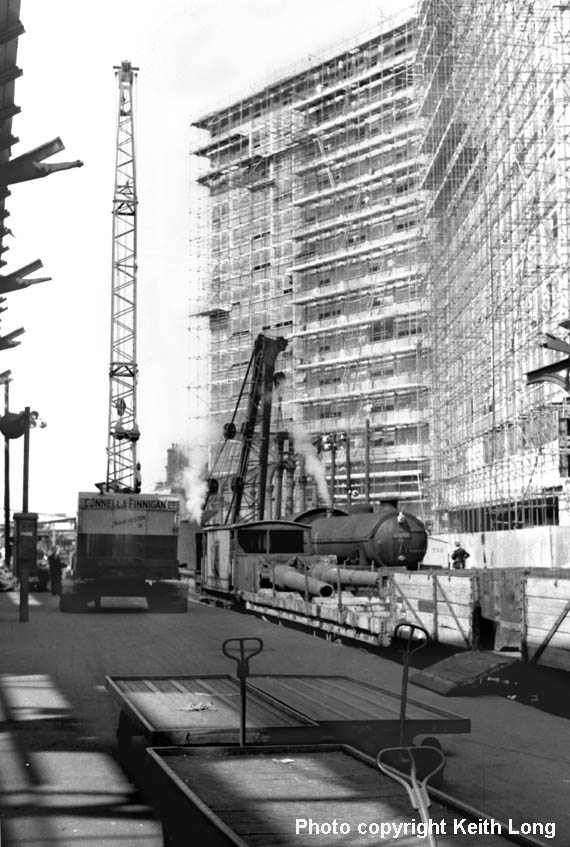 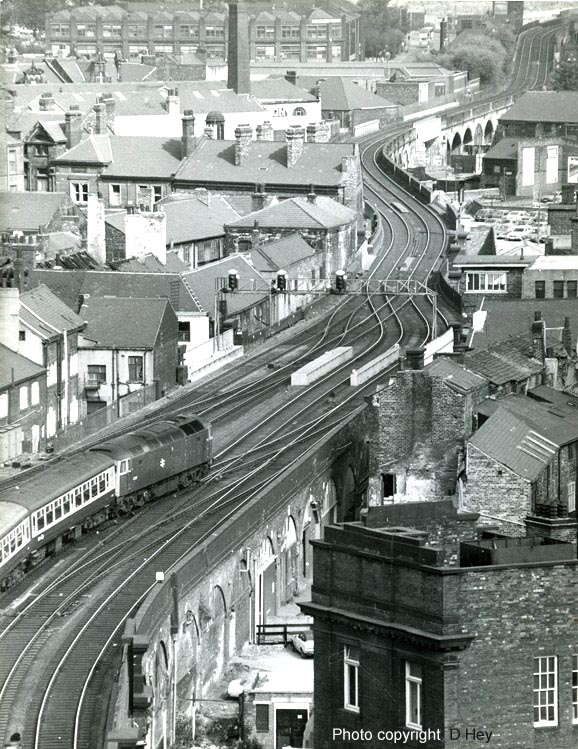 (Above) With only two tracks, the eastern exit of Leeds City station never quite commanded the same attention from railway photographers, but the line is steeped in history. Indeed much is written about the Stockton & Darlington (1825) and the Liverpool & Manchester (1830), but the Leeds & Selby Railway (built four years later in 1834) scarcely merits a mention outside the Yorkshire boundary. The company's terminus at Marsh Lane was Yorkshire's first main line to the city, followed sixteen years later by the Midland Railway from the south which opened Leeds Wellington station in 1846. By 1850, Wellington station also accommodated traffic from the Leeds & Thirsk Railway and LNWR, and nineteen years later the North Eastern Railway extended the Leeds & Selby line to a joint LNWR/NER station (Leeds New) which opened on 1st April 1869. The line involved considerable construction work, including an embankment across the site of St Peters Parish Church graveyard (top right, lined by trees). As might have been expected there was strong public opposition to the route, and an Act of Parliament provided for the gravestones to be re-sited on the slopes of the railway embankment. The 19th century tombstones are still visible today. In this view from the roof of the then 'Draganora' Hotel, Class 47 No 47553 heads a Liverpool-Scarborough train out of the city in June 1983. For the record, the joint NE/LNWR station and adjoining Wellington station were combined into Leeds 'City' station in 1938. 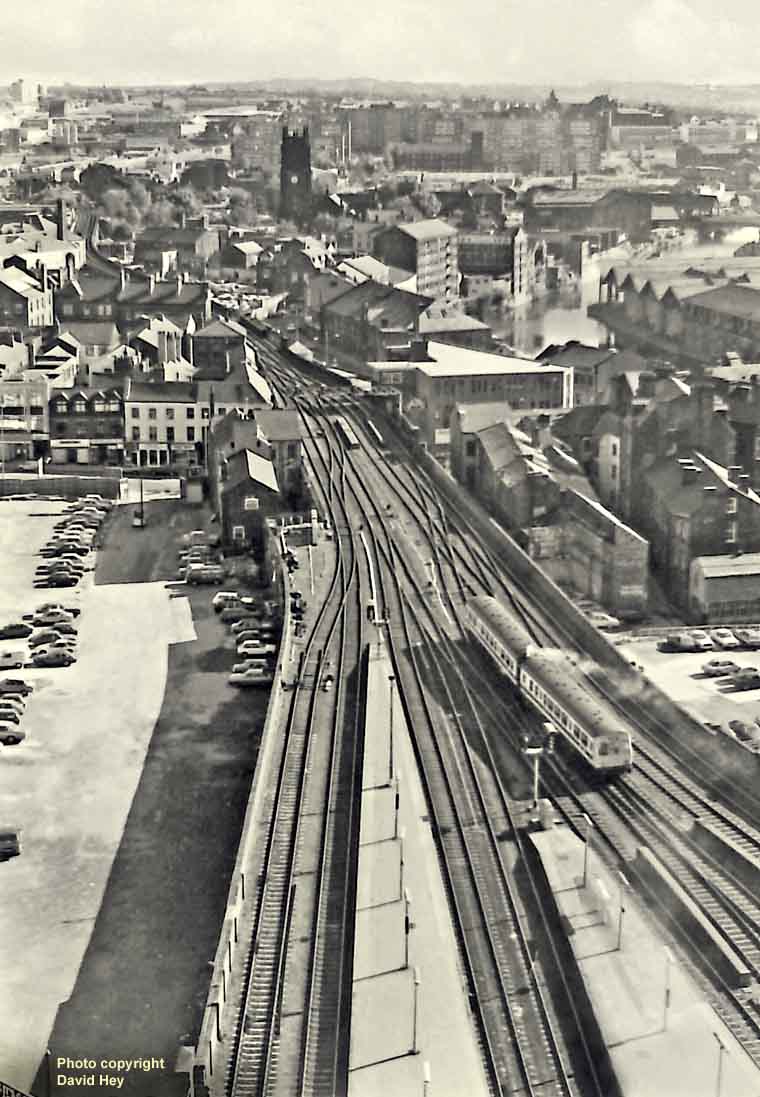 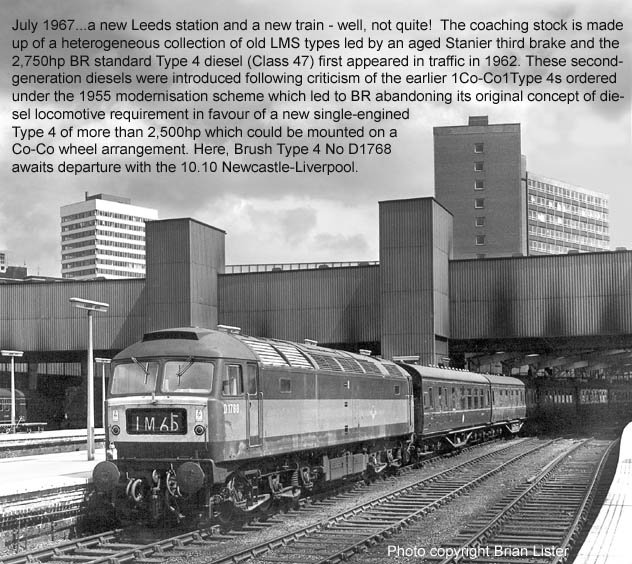 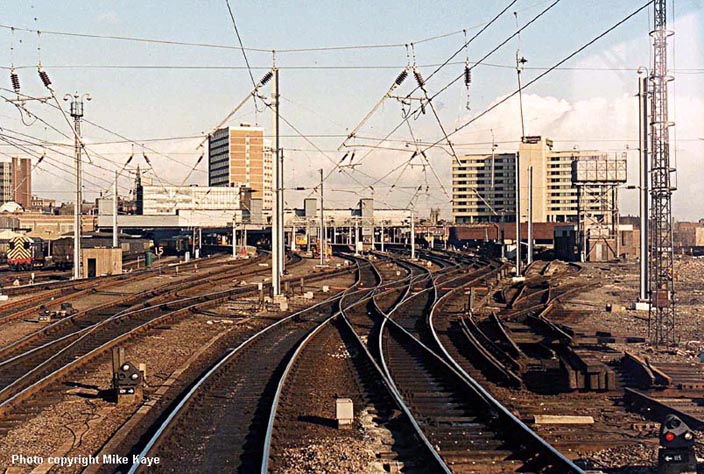 (Above-Below) Several photos featured on this page were taken from the rooftop of a modern office building called City House, which was under construction at the same time Leeds station was being modernised during the Sixties. Both City House and the Hilton Hotel (formerly Draganora Hotel) dominate the Leeds skyline in two interesting shots taken from the cab by GNR driver, Mike Kaye. (Above) The wires are now up as we approach Leeds station from the west on 'C' line. On the right,  trackwork to the Motive Power Area has been removed, whilst the PCD shunter can be seen on the left adjacent to the Parcels Area, now a car park. (Below) A cab view entering Leeds from the east on the up 'D' line on 24th April 1993. 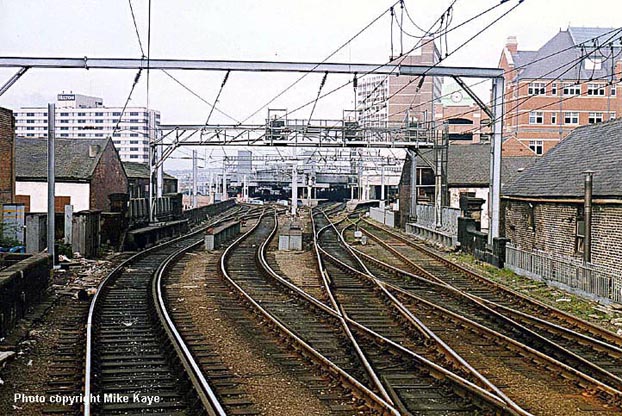 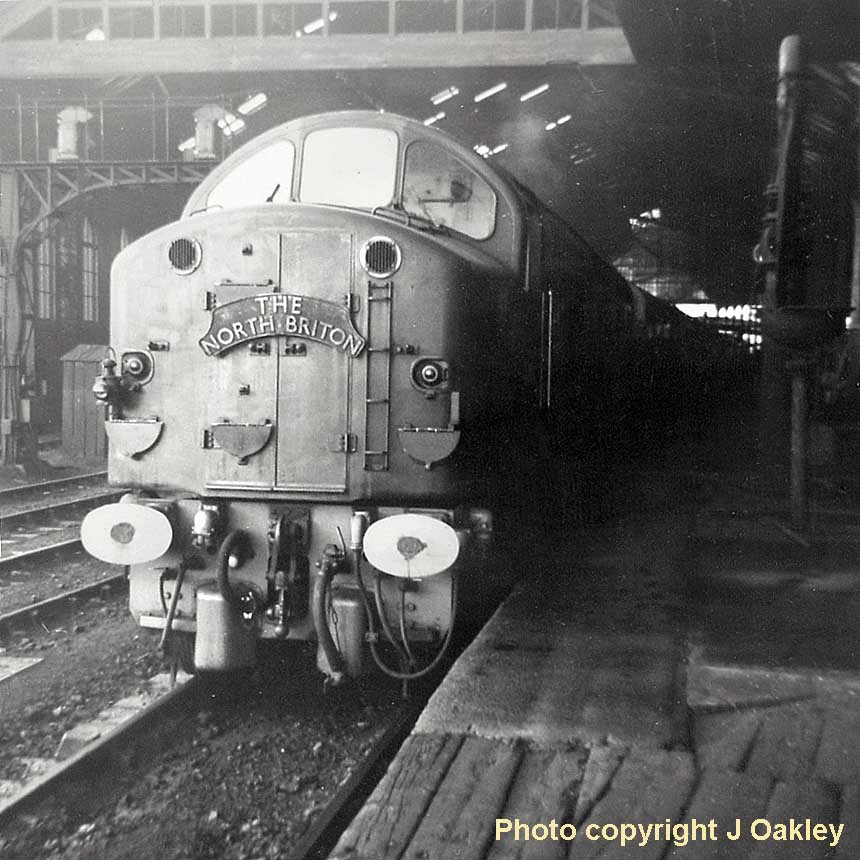 (Above-Below) Photographs of steam heading east out Leeds are a bit thin on the ground in my collection, but I am lucky to have this classic Jim Oakley shot of one of Neville Hill's new EE Type 4s being hooked on at Leeds City station...this photo brings back fond memories of the morning departure of the Leeds-York-Glasgow Queen Street/Edinburgh 'North Britain' during spotting trips to York in the Fifties and early Sixties. 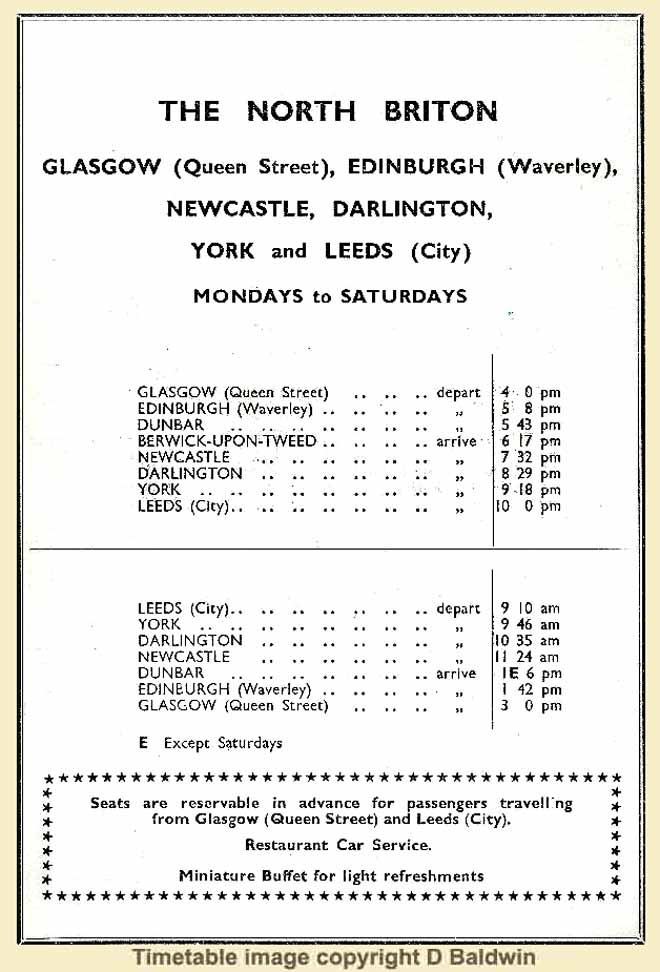 (Below) This contact sheet shows the variety of diesel motive power passing through Marsh Lane Cutting on June 6th 1981. In the first frame 6A-7 the original Leeds & Selby terminus (1834) was situated just beyond the bridge on the right, adjacent to a 700yd-long tunnel. This was widened to a deep cutting by the NER when the number of tracks was increased in 1894. 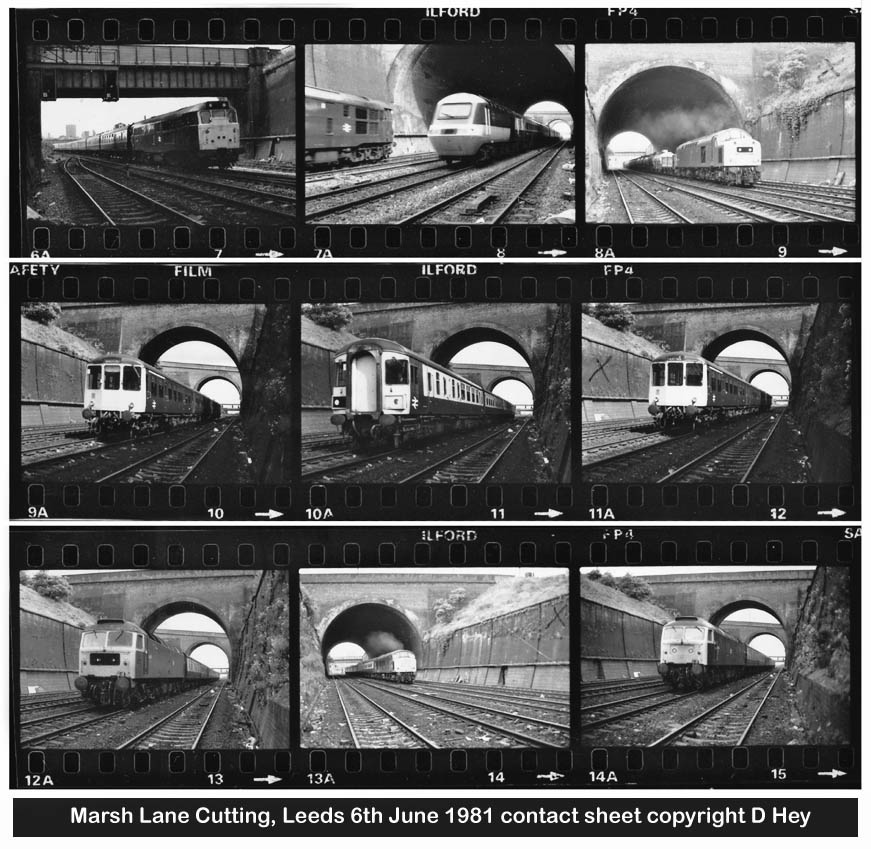 (Above-Below) Prior to preservation by the CFPS on the East Lancashire Railway at Bury, celebrity locomotive No 40145, the first of the centre-headcode Class 40s, heads oil tankers out of Leeds through Marsh Lane cutting. (Below) A long way from home! Scottish-based Class A3 No 60097 Humorist at Leeds Neville Hill West running light engine from Neville Hill shed to Leeds City Station to work the 19.02 (Fridays Only) Leeds to Newcastle in May 1963. Keith Long comments: this was a very interesting train and could be hauled by any class of LNER pacific from any shed - No 60097 was allocated to St Margarets (Edinburgh). I have even seen this train double headed by a D20 and A4. Built at Doncaster Works as No 2751 in April 1929, No 60097 was withdrawn on 24th August 1963 and scrapped at Doncaster Works in September 1963. 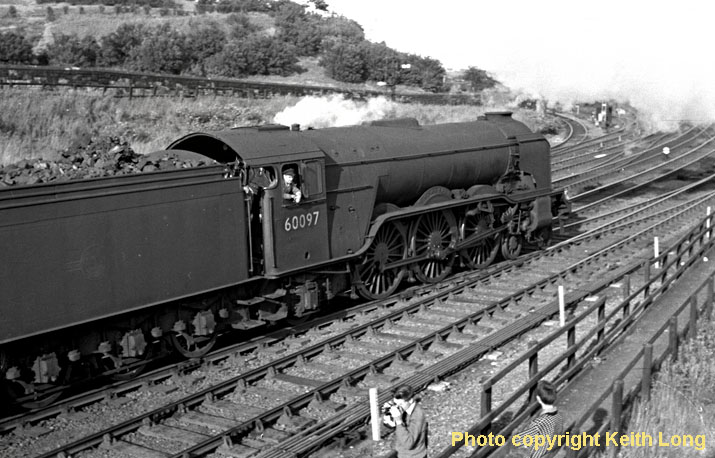 (Above-Below) As we grow older, and our childhood memories of spotting days become more distant - so too do our chances of ever quite recapturing them. Thank goodness for the preservation movement...a steam special on the main line will always pull in the crowds. But those who recall lazy lineside trysts with a camera during the Sixties are in for a rude awakening. The frenetic jostling for elbow room among the ratpack of photographers is more usually the case. On 23rd August 1981, a large crowd gathered at Neville Hill to watch Class A3 Flying Scotsman heading a 'Steamtown Special' from Carnforth to York. But all was not well! At the precise moment No 4472 emerged from Marsh Lane Cutting, an impudent Class 08 shunter crept into the shot heading towards Leeds. A loud groan went up from the spectators on the opposite side of the main line, then another - and another - until the air was turned blue with catcalls and boos! Fortunately, I'd taken a step back from the action to include the gallery of spectators in the foreground... 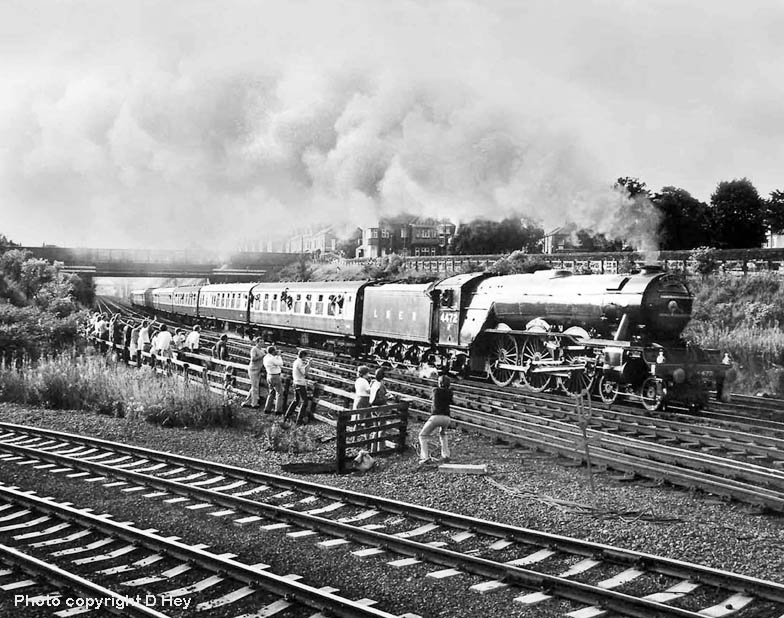 (Below) In the opposite direction, Neville Hill's floodlights dominate the scene as Class 45 No 45042 eases empty coaching stock out of the yard on 2nd October 1980. I hate banging on about this, but am I the only person who detested the BRB's standard overall blue livery? The new Corporate identity Scheme rendered the diesel's bodyside featureless in comparison to the lining-out of the earlier green variety. How much extra would it have cost the BRB to provide depot staff with a bit of masking tape and a pot of white paint? - peanuts!  It's such a shame - not only would it have made the diesel fleet look so much better,  it would have given staff an incentive to take pride in their particular traction. Unfortunately, the 'Peaks' missed out on the new colour schemes launched by the BRB for its Regional Services and Sectors in the late 1980's. By then they had gone... 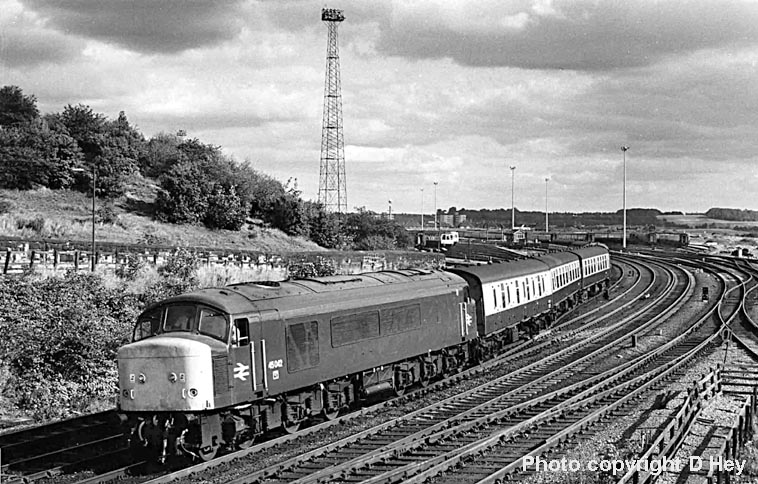 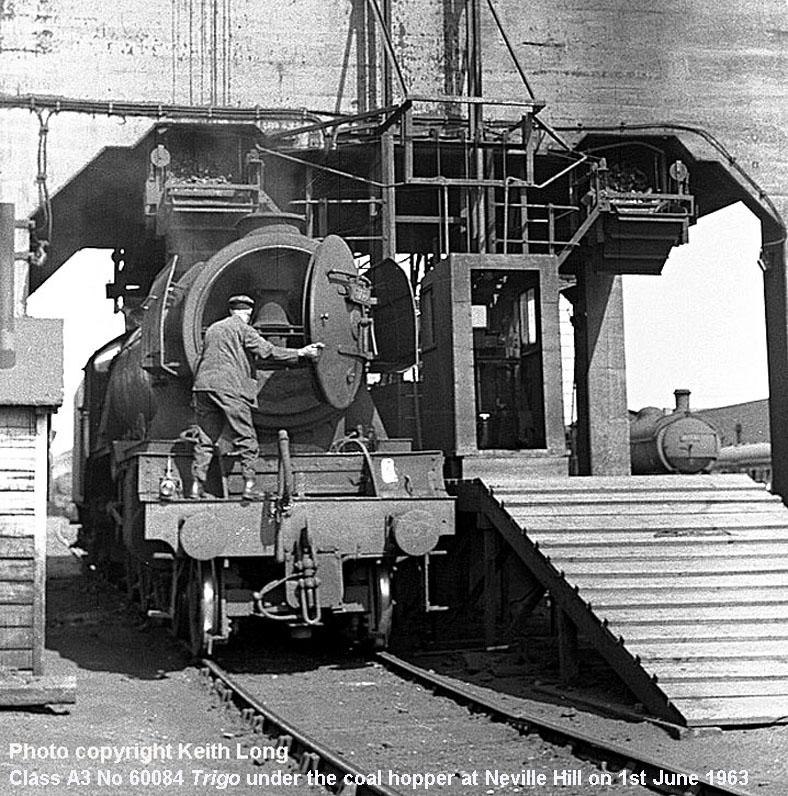 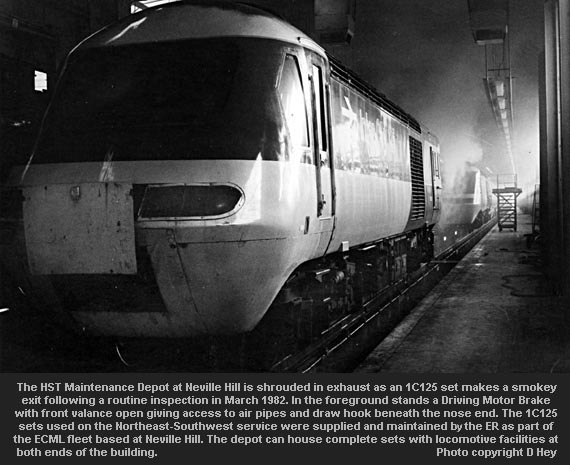 Polite notice: All text and photographs are protected by copyright and reproduction is prohibited without the prior consent of the © owners. If you wish to discuss the contents of this page the email address is dheycollection@ntlworld.com Please note - this is not a 'clickable mail-to link via Outlook Express: